Having completed two sets of workshops at the Royal Brompton Hospital in June, I trotted off to London this week to pick up the final completed mosaics and to present the final designs to rb&h Arts.

For the workshops, I spent two days working with patients, visitors, staff and passers-by to develop designs and ideas for the final artwork and then two days making mosaics, using a leaf shape as a basic template.  During the workshops we made over 70 mosaic leaves which will all be incorporated into the final artwork.

I also created 50 mosaic ‘packs’ for people to take away and use or for people that couldn’t make it down to the workshops.  These consisted of a bag of mosaics, a leaf template on brown paper,  a pot of PVA, a glue brush and a set of mosaic instructions.  The packs proved really popular and they were all used which was fantastic!

I’ve created a design based on the same leaf template but at a much larger scale.  Each ‘leaf’ incorporates the mosaics created during the workshops and these leaves will be displayed around the courtyard.  I’ve used every single one of the mosaics made which at the last count was 93 individual pieces.

I also delivered some of my leaf prints to the hospital as they are being used for a small exhibition in the foyer there alongside promoting the mosaic project.

Whoop whoop – I’ve been selected to create some mosaic artwork for the courtyard at the Royal Brompton Hospital in Chelsea.  The courtyard has just had all its plants and greenery removed due to a weight and water issue and they now need replacing with some colourful mosaics.  During June I’ll be working with patients, visitors, parents, staff and anyone else who wants to get stuck in to make something lovely and mosaicy.

Following six months of consultations, workshops, meetings, fabrication and lots of sanding, the Hyde Indoor Market artwork was unveiled on Saturday 6th April.  As I’ve mentioned previously, the artwork consists of 3D letters which spell out the words ‘Hyde Indoor Market’, with each letter representing something different sold within the market.

In terms of fabrication the letters presented a variety of challenges as they all required different processes to complete them – these included mosaics, mould-making and casting, decoupage, illustration, knitting and painting to name but a few.  Detailed images of each letter can be seen here on the Woodend Artists flickr page but I’ve included a select few below. 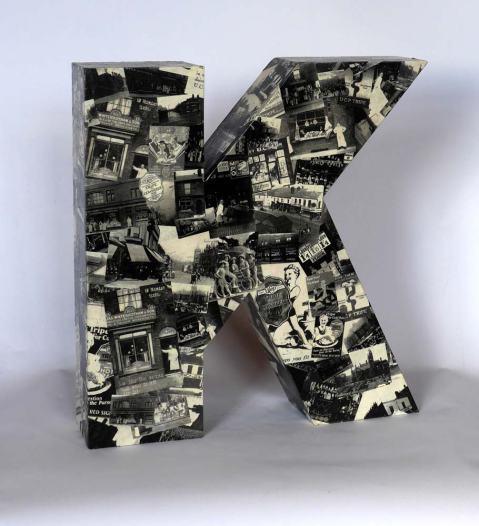 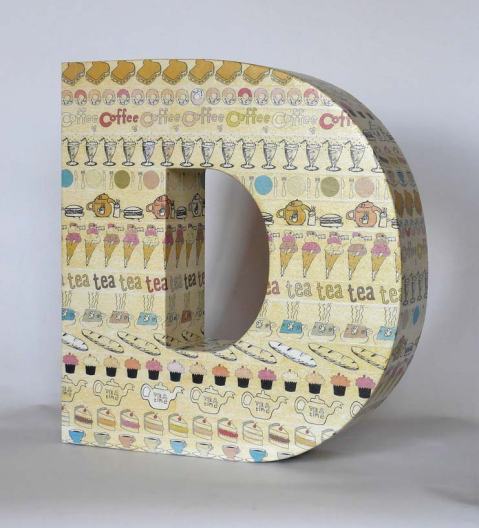 Myself and Richard Dawson have been commissioned by the RSPB to create some way markers for Dovestone Reservoir in the Peak District.  Each way marker will contain a small circular mosaic that depicts flora and fauna found in the area.  I’m currently working on the drawings for the artwork but in the meantime here’s a mosaic of the RSPB logo which I did just to get me in the mood! 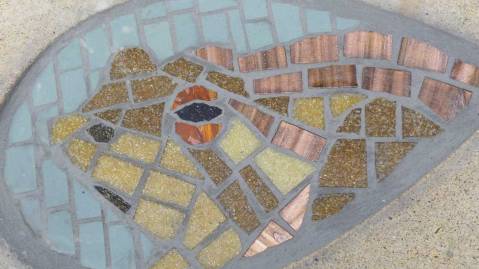 I’ve only just got round to photographing (and uploading) some of the finished mosaic elements from the Hyde Park Community Orchard public artwork.  The insects, birds and animals shown here are just a few of the mosaics created for the seating, wildlife discovery trail and pathway to the Orchard, all contained within an apple pip shape that formed a connecting element throughout the artwork. 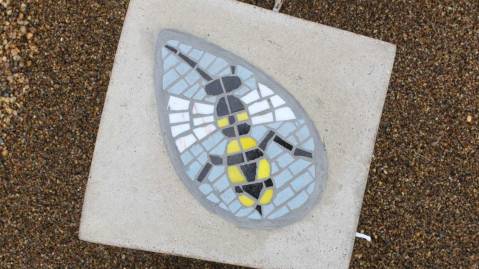 Following on from last year’s art project in Colshaw, myself and fellow artist Richard Dawson were asked by Cheshire East Council and Lime Art to return to the estate to run another project with the same group.  Last year’s project focused on creating artwork for part of a concrete wall on the edge of the park.  As the wall is (very) long and fairly unattractive, we decided it would be good to continue with this theme and create more artwork for the same wall.

Despite numerous and repeated predictions that the original artwork would get vandalised, only one part got burnt (a letter ‘S’ that was wrapped in varnished string) which was quite an achievement.  As part of the second project, we were also asked to replace this ‘S’.

We worked for several evenings with the group of young people to come up with ideas and concepts for what the artwork could be.  Then, during the October half-term we worked for three days to produce the work, which involved creating designs, large-scale drawing, using the fret saw to cut the shapes, sanding, painting and adding final detailing.  Each group member produced a large scale ‘character’ that they drew, cut out of plywood and painted.  We then took them away to varnish (the horrible, toxic, smelly bit) and brought them back to install on a freezing cold Saturday with the help of Steve from local housing association, Riverside.

As ever it was a pleasure to work with this group of young people from Colshaw.  Their energy, enthusiasm and interest in the project made it an incredibly satisfying and rewarding project to work on.  Yes, the group require a fair amount of discipline and control and it is hard work but the kids from this estate are some of the best I have ever worked with and I would choose to work with them again in an instant.

My post ends here.  If you can see an advert under this text – please ignore it.  It is WordPress’ policy to ‘occasionally’ place ads on blogs.  This advert is inappropriate to my readers and blog content and I am currently trying to get WordPress to remove it.  If you have time, please email support@wordpress.com to complain.  Thankyou!

Just before the build fortnight on the RHS Tatton show garden, I had 10 days in the rain (plus one dry day) installing artwork in the Hyde Park Community Orchard.  Not ideal weather for installing a mosaic which is mounted on paper but we soldiered on and (almost) got everything finished. 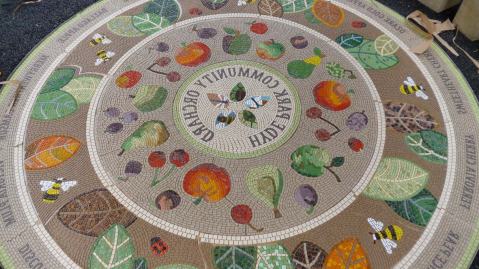 First job was a dry fit of the classroom floor mosaic to check it all fitted together onto the 3m concrete base.  The mosaic was separated into 27 sections, so it took a bit of work to make sure it all went together as it should.

Then the rain started…

But at one point we had two gazebos and three tarpaulins over the mosaic and they still weren’t enough to keep the rain out.

Richard Dawson was also installing his oak benches and banquet table at the same time.  These were the holes for the foundations of the banquet table to sit in.  There’s about a foot of water in them here… another couple of hours and they were full.

Still smiling… or is that grimacing?