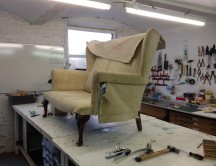 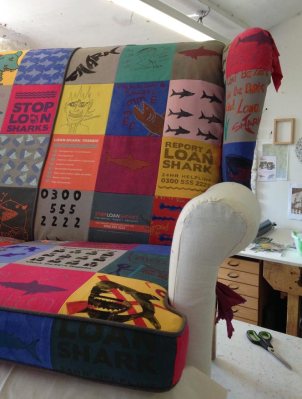 For the last three months, I’ve been working with community groups in Ashton-under-Lyne on a project based around illegal money lending.  Aimed at educating and raising awareness about the dangers of loan sharks community groups created lots of textile patchwork art that I am in the process of upholstering onto a two-seather sofa.

Whilst similar in style to the Bentley Library Chair, this sofa features more drawing, writing and printmaking than the other one which had a lot more sewing, applique and other needlecrafts on – maybe due to demographics of the groups and also timescale of the project.

Funded by the national Illegal Money Lending Team, the sofa will be used around Tameside as an educational and promotional tool before going to it’s permanent home at Cashbox Credit Union in Ashton.